· Of roots, character, and Kofi Annan

The most prized moments in my life included the following: Entering Mfantsipim School in 1961. The birth of my first daughter in 1985. And, in 2014, receiving from Kofi Annan both a citation for my work training teachers for quality education in Ghana – and a plaque which, in part, said, “Mfantsipim [is] about exemplary life for humanity through selfless, purpose-driven, and visionary leadership.”

And who best exemplified the Mfantsipim brand than Kofi Annan! In our naïveté, we thought the iconic alumnus would be with us forever, so the news of his passing must have shaken the very earth on which the school stood on the Kwabotwe Hill, Cape Coast. We mourn the world’s diplomatic rock star from the core of our souls.

He saved us from our worst instincts

The tributes pouring in since Annan’s death captured the true spirit of world leadership. The one from Jeffrey Sachs, in particular, resonated with the essence of a great man who the world will come to appreciate more and more as international events unfolded with each passing moment.

Sachs wrote, “In every generation we depend on a few people of supreme decency and intelligence to hold the world together … Kofi’s core idea was that our crowded, interconnected world requires economic justice, peace and human rights. He would often say that there could be no development without security, no security without development, and neither security nor development without human rights.”

Sachs asserted that Annan “saw the need for the world to join together to deliver the end of poverty, the cessation of war and the protection of human dignity. He believed that the United Nations was the unique global institution that could support these immense ambitions, and he made it his life’s work to fashion a UN for our times.”

He said, “Kofi opened up the doors of the UN to the people of the world. While the UN Charter appropriately begins with the words ‘We the People,’ the members of the UN are in fact the world’s governments. Kofi made sure that people all over the world would regard the UN as theirs, not merely their governments.”

Today we tend to take the Sustainable Development Goals (SDGs) for granted. But the humble beginnings of what is now driving the world to achieve the basics started with Annan. According to Sachs, Annan was tireless in championing the key aspects of the UN, especially the “moral charter the UN, the Universal Declaration of Human Rights. He brought the business community into the UN through the Global Compact.”

Annan led “the world’s focus on the least among us, as the world’s great moral traditions bid us to do. Kofi’s greatest achievement for the poor was to mobilize global energies to fight poverty, hunger and disease through the Millennium Development Goals (MDGs), which Kofi put forward to the world’s governments at the UN Millennium Summit in 2000. The MDGs inspired scientists, doctors, agronomists, community leaders, academics, business leaders, working people and youth.”

The roots of a pedigree

Clearly one of the most iconic Africans in the class of the legendary Kwame Nkrumah and Nelson Mandela, Annan was to say (in his memoirs, “Intervention: A Life in War and Peace”) “I was a member of Ghana’s ‘independence class’ of 1957 at my boarding school, Mfantsipim [whose] greatest legacy [was] to bring together boys from every tribe and region of Ghana and to make us all young citizens of the nascent state.”

Recalling his secondary roots on the hill, he said, “Everything was Spartan: small wooden desks, stone floors, bare walls, corrugated iron roofs. Stoicism was prized, along with learning and character.” As our elders say, the fruit does not fall far from the tree.

Roots matter. The solid foundations of great institutions matter, especially so when the exemplars are rooted in wisdom, and so committed that they shine firm elegant rays for emulation by younger generations. And that brings to mind a certain headmaster, Rev W.T. Balmer, who (from 1907 to 1911) grew the nascent school of a mere Faithful eight boys into a cohort of eighty bright eyed youngsters, in the span of about four years.

The best of the African character

For Rev Balmer, the commitment was not to teach his pupils to be grand Europeans but rather to be great Africans. He said, “Those who would lead Africa to a worthy life, and mode of expressing that life, must find some positive spiritual principle. Here is the task.” When the headmaster cautioned the indigenes not “to sin against the spirit within”, he wasn’t talking about the Ten Commandments. He was intimating that there was but one cause of human failure, and that was the lack of faith in one’s true self.”

He said, “the African character may grow in the clear sunlight of truth and sincerity. Then the fruits of African life will become more worthy and of more value than all her gold and merchandise.”

Reflecting on his own education, at the event celebrating the 100th anniversary of Francis L. Bartels, Annan said, “I want to reflect, with the shining example of Headmaster Bartels as my guide, on the crucial importance of teachers to Africa’s people and societies. The tremendous value of education to the individual and to society at large is now widely appreciated.” Farewell dear brother. You will be missed through the generations. 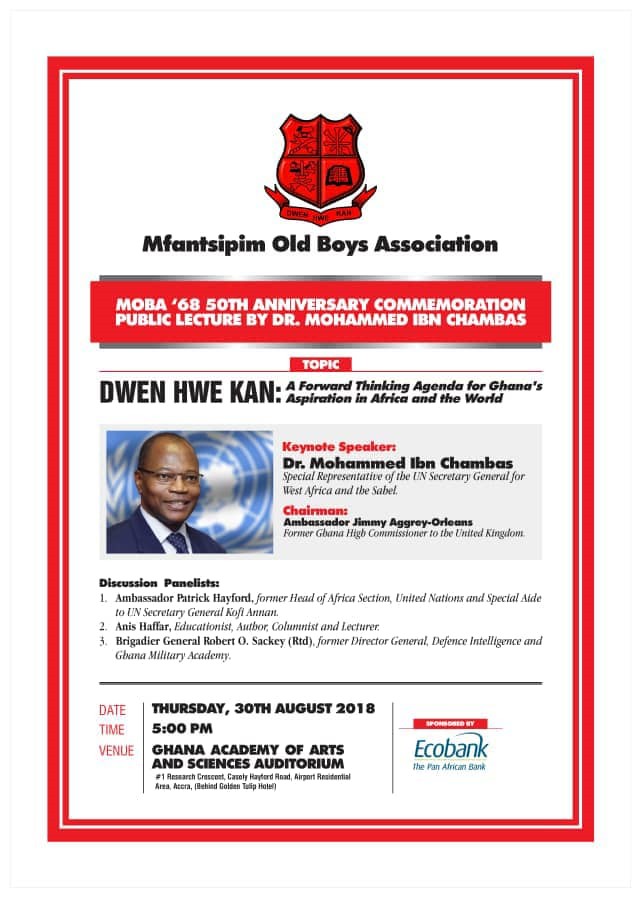